The tech industry has been abuzz with chatter about AV1 encoding recently. There are bold claims about how it will revolutionize streaming video, game streaming, and the Internet at large—but what is AV1 and why is it so important?

Advantages Of The AV1 Codec

AV1 is a (relatively) new video codec designed for video streams. It offers significant advantages over the AVC (H.264) and HEVC (H.265) codecs more commonly in use currently. For starters, AV1 is royalty free and open source, unlike these other options, as it comes from the Alliance for Open Media (AOMedia) which formed in 2015 for the explicit purpose of creating an open alternative. AOMedia has seven founding members—Amazon, Cisco, Intel, Microsoft, Mozilla, and Netflix—which have been joined by dozens of other members like Google and Apple along the way. 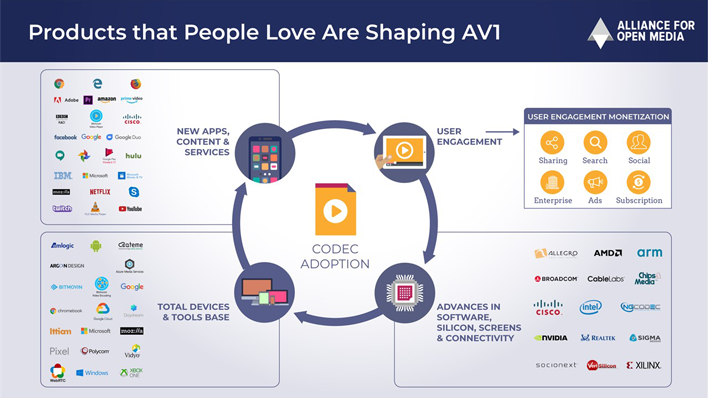 It needs to be more than just free and open source to succeed, though. It is far from the first effort in the space and is in fact built on the shoulders of its open-source predecessor, VP9, and others prior. VP9 has gained reasonable adoption including hardware encoding support on many platforms, but ultimately is regarded as often less efficient than H.265 with similar performance. AV1 fares much better.

So How Does AV1 Work?

AV1 uses “block-based frequency transformations” for encoding like many other formats. In effect, these methods divide a frame into small “blocks” of pixel groups, then perform some Fourier transform related math to store the data in a way that can be acceptably reconstructed, without the heaps of data needed to describe every bit of every pixel. AV1 uses VP9’s solution as a base but expands its options with additional techniques.

In AV1’s case, it uses so-called Superblocks of 128×128 or 64×64 pixels which can be further subdivided into smaller blocks as small as 4×4 pixels. When combined with new ways of partitioning blocks, like T-shapes, the encoding process can better represent the edges of objects with fewer blocky artifacts. This all results in a video stream that requires less bitrate (and therefore bandwidth) for a given image quality target, or a better-looking image at the same bitrate when compared to other codecs. 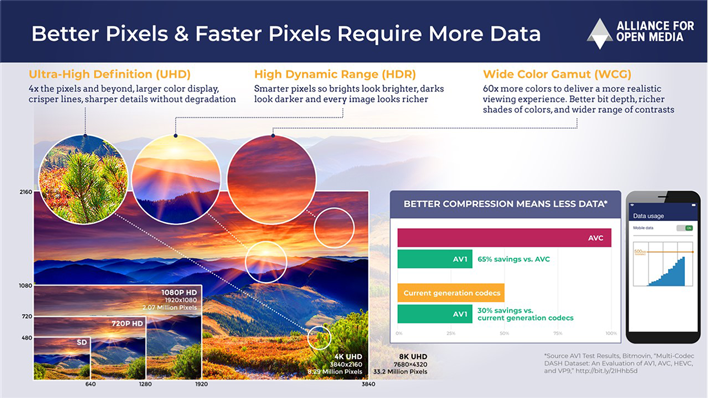 The efficiency gains mean AV1 is able to support more features. AV1 makes streaming HDR 4K video with wide color gamuts much more feasible. Though there is not really much demand for it yet, the codec is even suitable for 8K content when the time does come. It can also be used for 360-degree video with similarly high data demands.

Switching video content over to AV1 has not been an easy task, though, despite its free and open nature. AV1 encoding and decoding can be accomplished by brute forcing it on a CPU via software, but it is more computationally intensive than even H.265 HEVC. This puts it out of reach for lower end hardware to handle, not to mention the impact on battery life for mobile devices.

Recently, though, several platforms have started incorporating hardware encoding and decoding for AV1. These specialized circuits are significantly more efficient than software can pull off. Like most codecs, hardware decoding has been more broadly implemented first. Growing support for decoding allows large platforms like YouTube to leverage the AV1 codec to reduce bandwidth demands. We assume this will extend to livestreaming focused platforms like Twitch as well once dedicated encoders are in the hands of more content creators.

AV1 Decode Is Already Here But Encoding Is The New Trick

AV1 decoding is supported in hardware on AMD RDNA 2 GPUs (outside of the Navi 24 based 6500 XT), NVIDIA GeForce 30- and 40-Series GPUs, Intel Xe and Arc GPUs, along with mobile chips like the Samsung Exynos 2100 and 2200, various MediaTek Dimensity SoC’s, and Google’s Tensor processor. Qualcomm is notably absent from this list but has indicated the codec will be supported in its Snapdragon chips starting in 2023. Decoding support is great for content consumers, but without hardware encoding support, AV1 content is much scarcer. 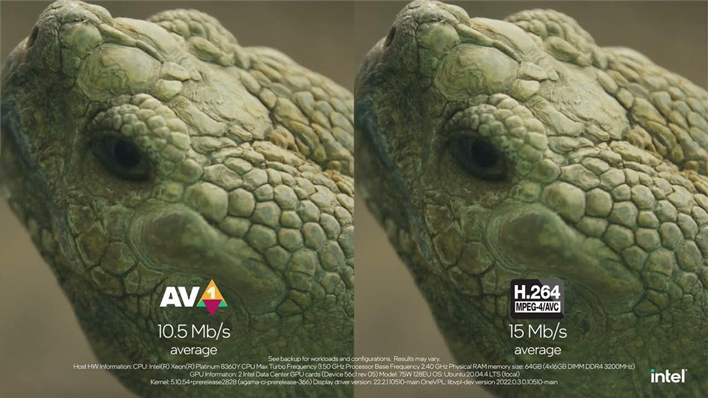 To that end, major silicon players are now also clamoring to support AV1 encoding to support content creation. Intel was the first to really step out in the enthusiast consumer space with AV1 hardware encoding support on its Arc Alchemist A Series graphics cards. While these have been difficult to source stateside until recently, the inclusion has garnered significant praise. Following suite, NVIDIA’s brand new RTX 40-series Ada Lovelace GPUs also bring AV1 encoding muscle, which we look forward to testing very soon. We can only assume AMD’s soon-to-be announced RDNA3 GPUs will not be left out of the party, either.

The future looks bright for the AV1 codec. In addition to growing hardware support for the codec to benefit video streams, the codec utilizes a layering coding technique called Scalable Video Coding (SVC), which makes it particularly well suited for video conferencing. A common issue, particularly in more populated conference calls, is that connection quality differs from one user to the next.

SVC effectively allows lower bitrate encodings to be extracted from the high bitrate source while reducing the redundancy of broadcasting parallel streams of varying quality. Not only can the lower bitrate streams take the form of reduced resolution, but it can also strip out frames to reduce framerate to reduce bandwidth as well. It is not the only codec to use this technique, but it is a very important consideration, nonetheless.

AV1 holds a lot of promise, as so many technological advancements do. The best part is that most consumers do not need to do anything special to take advantage of it. It is up to content creators and delivery platforms to leverage the technology, while soon anyone with a reasonably modern device will be able to reap the benefits of improved image quality and lower data usage.